Running a half marathon on a high dose marijuana edible: a case study

It was mile nine that I became a draft horse. One of those big and goofy Budweiser-type doofus-horses, the type with a cow for a grandfather, the sort for whom the word "plod" was invented. My vision was tunnel blinkered, my Hoka One Ones became Hoofs Oh Neigh Oh Neighs and my mind was empty and my attention had sharpened to the point where it was kind of a zen all-focus on nothing but my Horseness. I was stoned out of my gourd and on track to set a Half-Marathon PR. This wasn't just racing, this was racing on weed.

Marijuana has become a dirty little secret in endurance racing (at least in the western and sane states). What would it be like to take Edibles and run something long enough where the effect could be felt? I was inspired by Colorado Ultra-Marathoner and marijuana advocate Avery Collins who claimed in a 2016 interview with The Guardian that “50% of the runners I meet are avid cannabis users… I’d say almost none of them are open about it.” Collins is a professional racer with abilities I, as an amateur, could not compete with. But there was one element of performance I was confident that I could match Collins with… and that was being stoned.

It wasn't 5:00 am and my little sack of goodies was ready and waiting. There, next to the energy gels and peanut butter pouch, was my medicinal taffy. This was strong, real strong. It dated from the gray period before recreational marijuana had become regulated and the medical stuff had limits. Medical strength and from the good old days of the unregulated market it had a certain sheen to it, an aura of antiquated intoxication like that of those old cough syrup bottles where the second ingredient is cocaine and the first is grain alcohol. It tasted like strawberry starbursts that had soaked in bong water. The label stated 259 mg of THC (five times higher than the recreational limit), a legacy of those wild-west days in the medical weed gray market. I did not come to do this half-assed.

I had my partner to drive me to the race and they weren’t happy. Portland was recovering from an atypical January snowstorm that had shut the city down the week prior. I was unsure if there was even going to be a race until a couple days before when the snow had turned to rain and the grounds had turned to slush. After about an hour we arrived at a golf course that was prepped for the race. I embarked on my mission and ate that taffy right there in pre-dawn parking lot, nearly gagging on the Jolly Rancher meets bong water flavor of it. I stretched and prepped and thought and waited for the effect to kick in.

That hour before the race was alternately paranoid (do I have to go to the toilet again? Am I too stoned to tell? Is the line too long? Am I too stoned to determine if it's too long? Will I shit my pants determining if I’m too stoned to determine whether or not the line is too long?) and blissful as my mind veered from pre-race nerves to the insightful high of a solid sativa. The typical pre-race jock jams were deeply effective. It was like hearing them for the first time and I reflected on the lyrics in a way I hadn’t since middle school (“y’know, they never did tell us who let those dogs out…you’d think someone would know by now”).
By the time we were lining up by pace in different corrals I was fully stoned and feeling expansive, basking in a refracted satisfaction as if the race were already over. My thoughts were everywhere and nowhere and loosey-goosey in an easy greasy Sunday stoned day morning way. I saw the 9:00 pacer and latched onto them with my receding tunnel vision.

This was to be my third half-marathon and I had intended to finally break that 2:00 hour limit. The closest I’d come to this was in my first half when I ran a 2:01.32 with an average pace of 9:15. This meant that I was aiming for a significant upgrade in speed. But my mind had a preternaturally stoned focus to it and the sense of expansive satisfaction in my breast was strong. I believed that I could do this and set out to prove it.
Those first five miles I felt like a greyhound chasing an electric rabbit. The pacer was steady (despite being one of the goofy ones who like to pretend they’re going the wrong way or announcing midway through that this was actually a full marathon) and my intention clear. I had no time to think or feel stoned, my concentration had stretched to its maximum limit and I was as singleminded as I’ve ever been. Follow. That. Pacer.

Looking at my data I can see that I maintained this pace surprisingly well for the first five miles before hitting a wall and drastically slowing down. This time period correlates with the activation of the body’s own endocannabinoid response system, the neural process responsible for the “runner’s high.” New research has shown that the brain responds to extended exercise through the manufacture of endocannabinoids, neural transmitters that mimic the results of marijuana. In effect I was “double dosing” my own internal endocannabinoid response through the exocannabioids in the edible meaning that when the “runner’s high” hit it was double strength. One of the primary endocannabinoids produced by the human brain during endurance exercise is called anandamide, the root word of which is the Sanskrit term “Ananda” meaning “joy, bliss, delight.” During this period of the race my anandamide was pumping at full blast, responding to both internal signals to produce stemming from the exercise and the external application of the edible itself. My Ananda did want fun because I did run, son.

Miles 5-9 flew by in this blissful (but quite slow) haze. I’m myopic and fear contacts so my race face is always a moley squint but now this felt exquisite. Visions of Monet’s smudged lilies filled my sightline in an impressionistic blur of sunrise. Flocks of birds from the treelines, swans upon the lake, steam rising from the golf course in the chill of the morning air, all sensations smudged together into a pleasant pink-tinged soft-focus as the sun rose. My pace went from a fairly steady 9:00 to a wide range from 9:30 to 10:15 as the double blast of runner’s high hit my cerebral cortex. 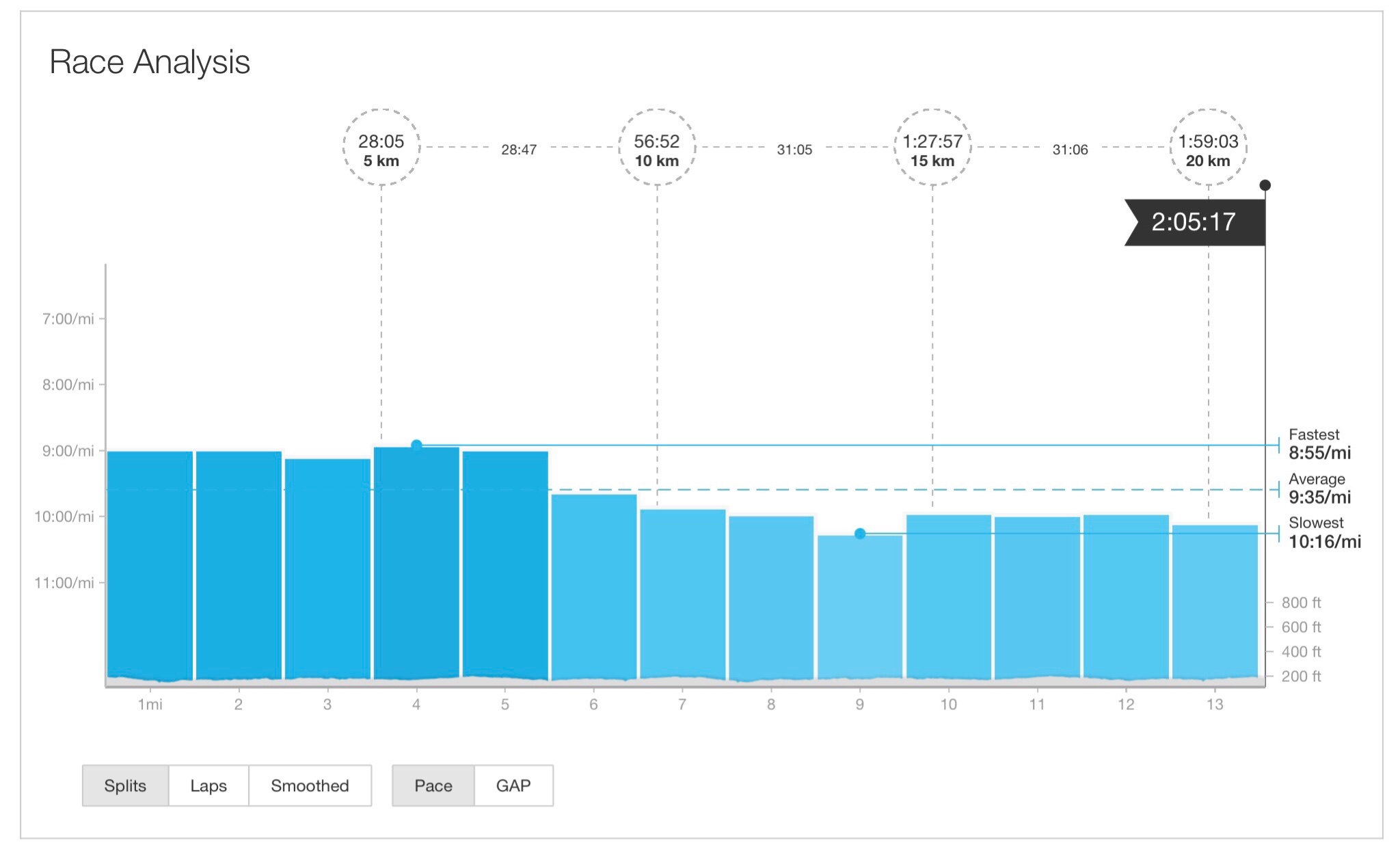 If there's any kind of performance enhancing affect to be derived from marijuana it was in this empty-headed and painless passing of time and miles. The analgesic effect was significant: following the race I’d find out that a blister had formed and burst on my toe soaking my sock in blood but I had no awareness of it at the time. On an extended race I could see this pain-killing effect and time-killing mental state being a real advantage, on a half it just made the time fly. I was maintaining my buzz but my splits were getting ungainly. Things would have to change. With a conscious effort I recollected myself and recommitted to the race.
Mile nine is where I usually have to dig. And it was here that I became a dray horse. I am a Big Guy and was consumed by thoughts of those giant beastly horses straining at the yoke, their chests rippling in their stays as their foam-flecked lips pull back in a grimace, digging deeply as they drag their plows and sledges. I was that horse, that horse was me. I wanted to bray a barbaric whinny upon the golf course.

It was this mindset that took me across the finish line with a steadier (if not faster) pace. Miles 10, 11, and 12 were at 9:57, 9:59 and 9:57 respectively. I was still feeling the effects of going out too hard in those first five miles but the steadiness of my gait was a significant improvement over the sporadic unevenness of those middle miles. Becoming a horse may not have meant speed but it was a steady and, yes, plodding pace that got me to the end with a final time of 2:05. Not quite a PR but perfectly respectable for a draft horse. 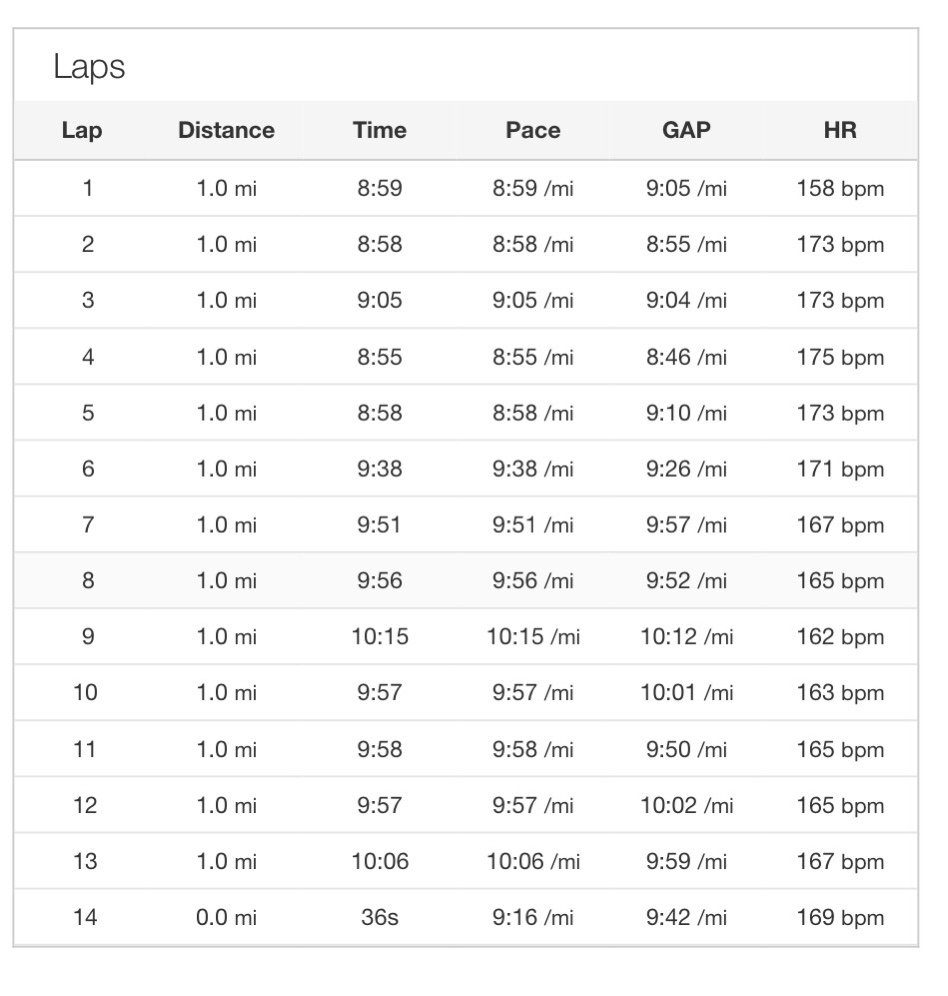 I ate my banana and a cup of gross soup. My eyes were bloodshot and glazed. I had absolutely no sense of time. You could have told me I’d just done a Boston Qualifier or that I had taken four hours and I’d have believed you either way. I was exhausted and drained, my brain pickled through the cannabinoids (both endo and exo) they’d been exposed to. But it was my exhaustion that was notable. I was deeply tired in a way that did not seem to correlate to my perceived exertion. It took an analysis of my heart rate data via my garmin to determine the source of my weariness.
A review of the medical literature reveals cannabis is associated with irregular heartbeat. The stereotype of the paranoid first-time smoker with a racing heart and sweaty pits has some roots in reality. The predominant physiological effect of the marijuana edible I consumed was in a significantly elevated heart rate, or tachycardia. During the race I didn’t notice the tachycardia but an analysis of my heart rate data collected by Strava afterwards revealed it to be acute.

Two months prior to this race I had ran my first half-marathon and did so with an average pace of 9:15. On this race I was quite a bit slower with an average pace of 9:35. Despite the slower pace my heart rate was significantly elevated as a result of the marijuana. Even though my pace was a full twenty seconds slower my heart rate was predominantly over 161 while in the earlier race it was in the 146-161 range. My maximum heart rate was also notably higher, running seven minutes in the anaerobic zone of over 175. Even in my fastest half (several months later), where my pace was nearly a full minute faster, my heart rate remained in a substantially lower range. On a performance level I'd have to reckon that any perceived analgesic advantage would be outweighed by the associated tachycardic exertion.

I do not recommend racing under the influence of marijuana edibles of that strength to any but the most hardy and experienced of stoners. While the mental intoxication was not debilitating (at least by my perception) the dramatic increase in heart rate is clearly concerning. The risk of serious injury caused by extended endurance while undergoing tachycardia is a real one. If I were to repeat this experiment in the future I would do things differently by using a marijuana edible of significantly lower strength. Ultimately my cardiac rate was off too great a concern; I'd recommend always putting the heart before the horse.

Running a half marathon on a high dose marijuana edible: a case study

Runner’s Weed It was mile nine that I became a draft horse. One of those big and goofy Budweiser-type doofus-horses, the type with a cow fo... 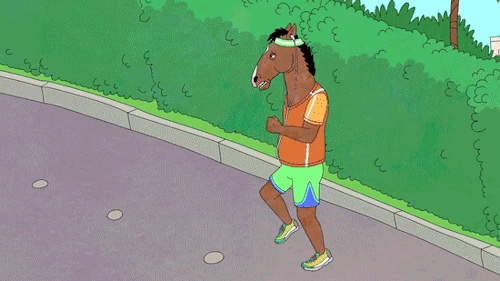